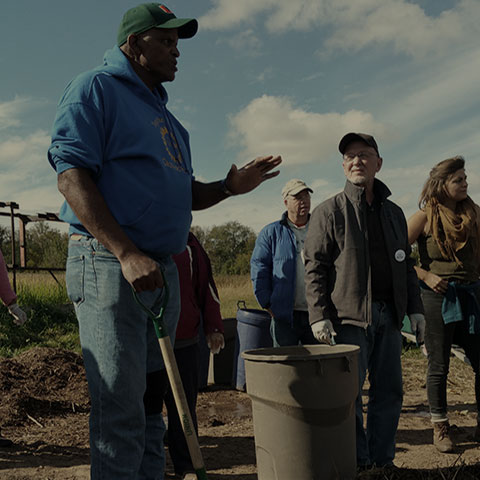 A signature event in WEI’s education programing is the annual Growing Power Regional Training Weekend.  At this training weekend, now in its eighth year, we  bring urban and rural farming together for hands-on training in hoop house building, microgreen production, compost and vermicomposting, and mushroom growing. The educational aim of this weekend is to create networks of people working on what Will Allen calls The Good Food Revolution.  The goal is to build healthy sustainable farm communities locally, regionally and nationally by growing more farmers and the systems needed.

More Information on Will Allen.

Will Allen, is a nationally and internationally renowned urban farmer who is transforming the cultivation, production, and delivery of healthy foods to under-served, urban populations. Guiding all his efforts is the recognition that the unhealthy diets and related chronic diseases of many low-income populations are largely attributable to limited access to safe and affordable fresh fruits and vegetables.

In 1995, while engaging neighborhood children in an urban gardening project, Allen began developing farming methods and educational programs that are now the hallmark of the non-profit organization Growing Power, which he co-founded and directs. Rather than embracing the “back to the land” approach promoted by many within the sustainable agriculture movement, Allen’s holistic farming model incorporates growing farmers and building the infrastructure to distribute the food produced by the farmers in the regional place where farmers and consumers come together.

Will Allen was named as one of Time Magazine’s 100 Most Influential People in 2010, is a winner of the 2008 MacArthur Foundation “Genius” Award, is one of an member of the elite group of winners of the James Beard Foundation Leadership Award, and was honored as the endowed chair of the College of Food, Agricultural, and Natural Resource Sciences at the University of Minnesota.